Are you on-track to meet your carbon reductions targets? Take our free assessment →

Save forests, improve lives, and reduce CO2 emissions with Africa's most efficient cookstoves 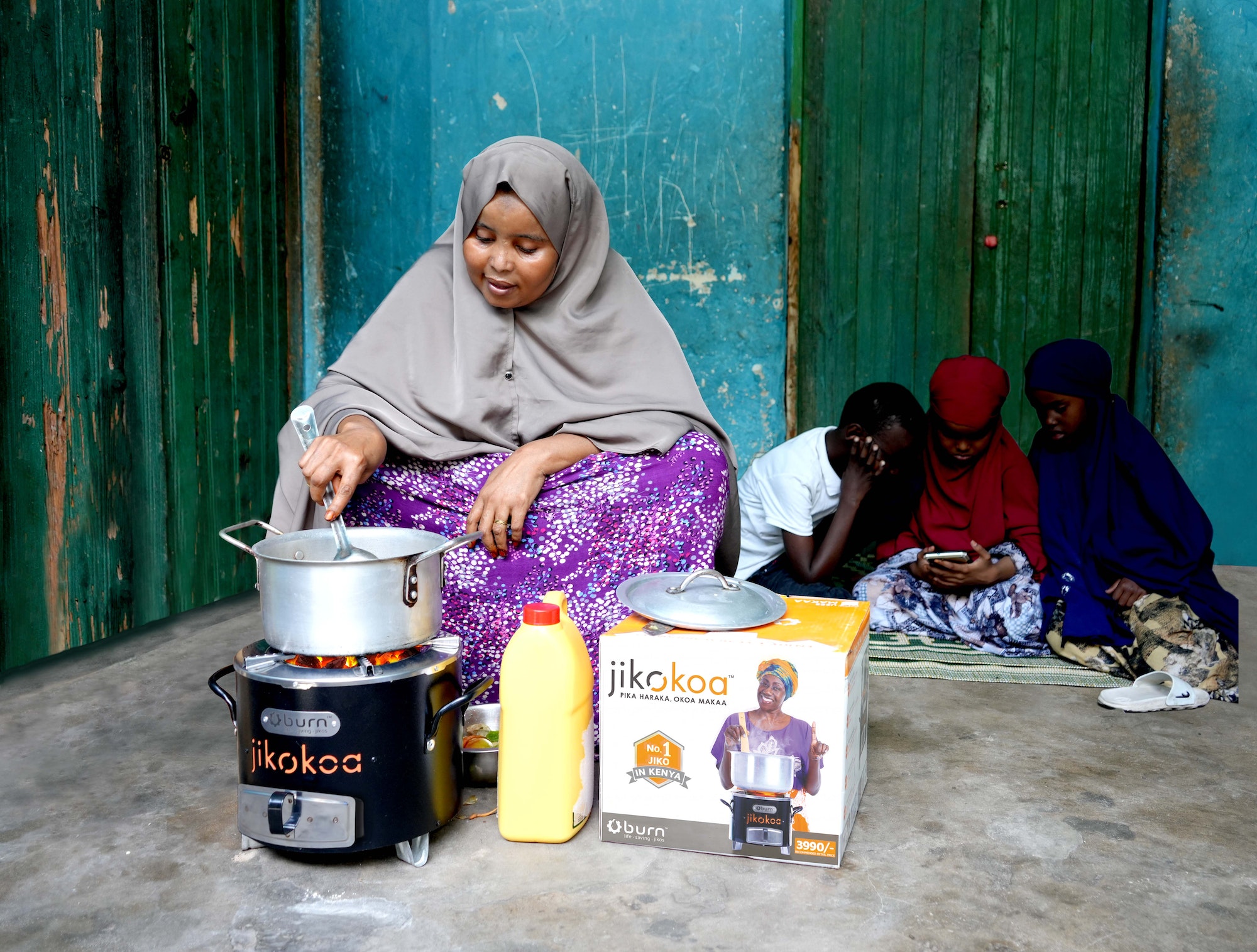 Learn more about the
project

BURN’s Jikokoa cookstoves aren’t just any cookstoves. They’re recognised as the most fuel-efficient biomass cookstoves in Africa, and an independent study by UC Berkeley and the University of Chicago concluded that they're the investment with the highest return an household can make. BURN has a factory near Nairobi, Kenya that manufactures and distributes these cookstoves and employs over 400 people, 60% of whom are women.

Your contribution will support the manufacturing and distribution of these cookstoves so more people can benefit from using them. Because the Jikokoa uses less fuel, it helps reduce greenhouse gas emissions and the pressure on forests and their biodiversity. This simple cookstove also tackles social issues by improving health outcomes, saving families money and time, and creating jobs for manufacturing, distribution and sales.

BURN is the world's leading clean cookstove manufacturer and distributor. Since 2013, we have been manufacturing and distributing life-saving devices across sub-Saharan Africa to low-income families.

Everything about this project at a glance.

Our atmosphere is like a bathtub, which we have been filling for decades with greenhouse gasses. Each ton of CO2e in the tub increases the global temperature and affects the climate.

In order to prevent our bathtub from spilling - which would mean reaching a +2°C temperature increase - 3 types of actions exist:

Reduction: These projects reduce emissions, closing the tap and slowing down the filling of the tub (e.g. switching to more efficient fuels)

Avoidance: These projects preventing future emissions, stopping a new tap from being opened (e.g. protecting forests and peatlands so that they don’t start releasing CO2)

Solutions are different ways we can reduce, avoid and remove our emissions. They vary in terms of cost, level of maturity, potential to scale, and other factors. To make comparisons easier, Sweep groups solutions into categories such as Forests, Geoengineering or Buildings. Climate solutions are numerous: to learn more about what can be done, explore our catalog.

Solutions can be deployed in a large range of locations, from a micro-regions to entire sections of a continent. You might want to focus your contributions on specific areas to maximize local socioeconomic impacts or contribute where your activities are based.

Various international and regional standards rely on established methodologies, dedicated processes and third-party verifications to guarantee that a project delivers on its promises.

Certified: Standards, such as Gold Standard or Verra, are listed for maximal transparency

Not certified yet: The process to be certified is expensive and cumbersome, and ad-hoc methodologies might not exist for specific projects, preventing them from being certified. Sweep promotes other projects after a necessary due diligence, bringing more projects to a wider audience while also offering opportunities to develop and tailor new projects according to your own needs.

Capacity is the projected volume of tCO2e reduced or removed during the crediting period. This indicates the projected net impact of a project after adjusting for potential negative impacts and other externalities. This is key to assessing the current scale of a project and can give a quick estimate of what the considered volumes represent at the project scale.

Capacity does not reflect the available quantity of credits as some of them can already be sold.

Certified projects are eligible to generate carbon credits over a certain period of time. This crediting period gives a good estimate of the progress of a project.

Crediting periods covering coming years may have already been audited for a fraction of the volumes. The rest will be generated along future audits.

The solution is on average 62% more economical than coal for households.

80% of the households perceive an increased inoor air quality.

More than 100.000 devices will be distributed, helping households better use their energy.

The project will create 25 jobs.

Projects often have positive side effects beyond reducing, removing, or avoiding emissions. For example, projects might reduce waste, protect biodiversity, or support indigenous people. These co-benefits are modelled after the UN Sustainable Development Goals (UN SDGs).

Durability only applies to to removal solutions. It indicates for how long the carbon will be removed from the atmosphere - the longer this is the more desirable. For example, storing carbon as mineral underground is more durable than in a tree, making it a less risky and longer term solution.

Additionality reveals the impact of your financial support. It indicates what percentage of the global project budget is coming from contributions.

High additionality means most of the project revenue relies on contributions, and they would likely not be able to happen without this financing.

Other additionality criteria, such as policy or regulatory additionality, are tackled through certifications and not assessed here

The total project barrier score is available when all types of barrier are provided. It is a composite score based on the 5 barriers assessed.

The biggest barrier to the project lies in the difficulty of adapting Burn's existing expertise to Somalia, a country where this type of solution is still in its infancy. The use of carbon credits is thus the only way for us to deploy our solution on a large scale.

Barriers are the different hurdles a project might need to overcome. Barriers can give you a sense for the challenges a project faces, but also how it can add deeper value and create change. We differentiate five types of barriers: economic, social, institutional, technical and financial.

Create your portfolio to get started

Our carbon team will help you tailor your portfolio based on your preferences.

Sweep helps you get your
carbon on-track

Sign up to The Cleanup, our monthly climate newsletter.